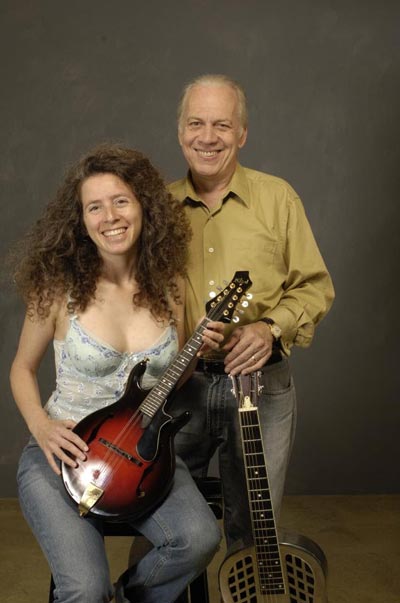 Due to concerns with the water in Mansfield and other matters out of our control, this show is CANCELLED. Refunds have been issued on EventBrite. If you have not been notified, you will be shortly. If you have questions, reach out to steve@rosegardenfolk.com. We hope we can rebook Annie & Paul for another date, either this season or next. Sorry for the inconvenience. …Steve

Rishell and Raines, hailed as one of the world’s best blues duos, will perform at the Rose Garden Coffeehouse, 17 West St., Mansfield, at 8 p.m. Saturday, Sept. 17. Tickets $20 in advance, $25 at the door.

For 29 years Paul Rishell & Annie Raines have been hailed as one of the world’s best blues duos. They have recorded 6 albums together including the W.C. Handy Award-winning Moving to the Country (2000), and received numerous award nominations from the Blues Foundation. They have performed and recorded with John Sebastian, Susan Tedeschi, Pinetop Perkins and Rory Block. They have opened for Ray Charles, Dr. John, and Little Feat, and performed on international radio and TV shows including Late Night with Conan O’Brien and A Prairie Home Companion. They continue to perform American roots music and their own compositions at festivals, concert halls, and clubs all over the world. As a working team, Paul and Annie have racked up hundreds of thousands of miles on the road in the U.S. and Europe, collaborated on original songs, and released the Blues Foundation Award nominated TALKING GUITAR , I WANT YOU TO KNOW (Tone-Cool/Artemis 1996), MOVING TO THE COUNTRY (2000), the W.C. Handy Award winner for Acoustic Blues Album of the Year, and GOIN’ HOME (2004), which was nominated for two Handy Awards.

Paul Rishell and Annie Raines’s sixth project together, TALKING GUITAR was released in 2012 and received 2 Nominations for the Blues Foundation’s Blues Music Awards. It features Paul returning to the bare essence of country blues, with stunning solo performances of gems by Lead Belly, Blind Boy Fuller, Skip James and others, with Annie joining in on a few tunes. It is stark, stripped down and intimate. Their previous album, the live recording “A NIGHT IN WOODSTOCK” was released in 2008 as a CD and in 2009 as a DVD on their own Mojo Rodeo label, and distributed internationally by Burnside Distribution, each release earning multiple Blues Music Award nominations. The live concert features special guests John Sebastian, Bruce Katz, and Paul and Annie’s own backing band joining the duo for an eclectic, high-energy set of acoustic and electric originals and classic blues songs. The DVD includes extra features such as artist biographies, video guitar lessons and audio commentary by Rishell, Raines and Sebastian.

Paul and Annie are equally passionate about their craft and devoted to the study and performance of a wide range of blues styles, from the syncopated acoustic guitar wizardry of Blind Lemon Jefferson and Son House to Chicagoan “Little” Walter Jacob’s swinging amplified harmonica. Paul has reached what Boston Phoenix writer Ted Drozdowski called “a place deep and resonant as Robert Johnson’s crossroads, where authenticity, soul, and a sense of purpose and commitment ring out in every note he sings and plays.” Annie has added vocals, mandolin, piano, and other instruments to her musical arsenal, while being recognized by top professionals and fans worldwide as the “queen of the blues harmonica.” Says blues legend Pinetop Perkins, “She plays so good it hurts!”

Touring internationally at festivals, clubs, and concert halls, and teaching workshops and seminars, Paul Rishell & Annie Raines have earned loyal fans around the globe. Paul and Annie are featured in the new jug band music documentary, Chasin’ Gus’ Ghost, which debuted at the San Francisco Film Festival in August 2007. They have performed on diverse radio and TV shows including A Prairie Home Companion, Late Night with Conan O’Brien, and PBS’s Arthur. They have performed and recorded with Susan Tedeschi, John Sebastian, Pinetop Perkins, and Rory Block. Susan Tedeschi recorded an “unplugged” version of Paul’s Blues on a Holiday with Paul and Annie for her 2003 release, Wait For Me.

Annie Raines was born in 1969 in Boston and grew up in the suburb of Newton, Massachusetts. She picked up the blues harp at 17 and made her stage debut at the 1369 Jazz Club in Cambridge a few months before her high school graduation. Enthralled by the recordings of Muddy Waters, Little Walter Jacobs, Big Walter Horton and Sonny Boy Williamson, she became a fixture at Boston area blues jams. She briefly attended Antioch College and 1988 interned with Washington, DC homeless rights activist Mitch Snyder, who persuaded her to drop out of school to pursue her musical career. One of the few female blues harmonica players in the country, Annie played the New England club circuit with local bands, and traveled to Chicago where she met and played with many of her musical idols including Pinetop Perkins, Louis Myers, and James Cotton. She also enjoyed yearlong stints with the Tarbox Ramblers and the Susan Tedeschi Band, going on to perform on Susan’s first three albums. She lives in Boston with her number one musical hero, Paul Rishell.

Paul Rishell was born in Brooklyn, New York in 1950, descended from a long line of Methodist preachers and Norwegian painters. At the age of ten, he discovered that he could keep time on the drums, though his feet didn’t reach the pedals. He started a band a few years later, playing surf music and rock ‘n roll, until a friend turned him on to the country blues records of Son House, Robert Johnson, Charley Patton, and Blind Lemon Jefferson. He immediately took up the guitar and in the early 70’s Paul moved to Cambridge, Massachusetts and had the chance to play with many of the first and second generation of blues masters — including Son House, Johnny Shines, Sonny Terry, Brownie McGhee, and Howlin’ Wolf. Paul Rishell’s debut recording, BLUES ON A HOLIDAY (Tone-Cool) was released in 1990 to resounding critical acclaim. The album was half acoustic, half electric, and established Paul as a masterful, versatile blues player and as well as a deeply soulful singer and songwriter. He followed that with SWEAR TO TELL THE TRUTH in 1993, which featured heart-stopping solo performances as well as guest artists Ronnie Earl and the Broadcasters and “Little”Annie Raines. Paul’s original music has been used in plays, films, and countless television shows including Friends, Oprah, and A&E’s Biography. He has built up a stellar reputation over 40 years as a performer, teacher, and torchbearer of the country blues tradition. His former students include Susan Tedeschi and Michael Tarbox. Dirt Road Blues, Paul’s instructional video/CD-Rom for Truefire.com, was released in 2008 with detailed demonstrations and transcriptions of his original songs and songs by Scrapper Blackwell, Blind Boy Fuller, and many others. He is currently serving as a visiting artist at Berklee College of Music in Boston.