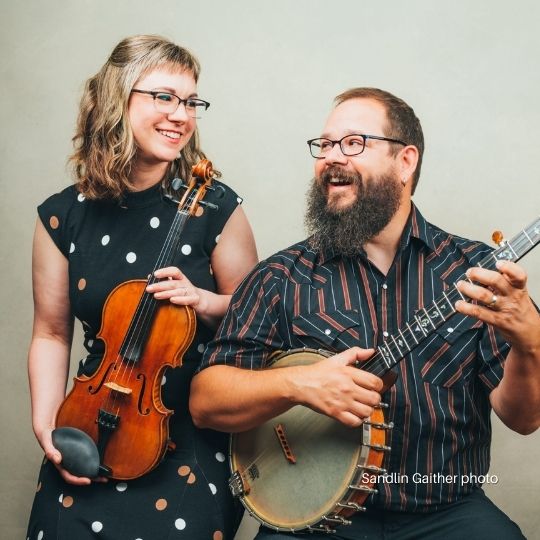 To listen to April Verch and Cody Walters is to be immersed in tradition. To watch them perform is to be transported. Be it regional Canadian roots, American old-time, 50’s Country, Scandinavian folk music, or something original that sounds as though it’s been around for a century—the one common thread is their love and reverence for the music and traditions that have been passed down to them.

Verch and Walters began playing together in 2007 when Walters joined the April Verch Band as their bassist. Initially formed as a pickup band centered around Verch’s own fiddle and dance stylings in 2000, the band grew and blossomed into an established trio of world-class musicians, spanning several musical traditions and backgrounds, yet all united in their mission to share the music they love. Together they have traveled to four continents, performed in fourteen countries, and played everywhere from tiny pubs and dusty festival workshops all the way to legendary stages such as the Kennedy Center and the Ryman Auditorium. In 2018—fittingly amidst their ever-busy tour schedule—April and Cody were married.

During the heart of COVID lockdowns in 2020, the couple began performing as a duo out of necessity, and learned firsthand that sometimes, art born of necessity can yield unexpectedly beautiful results. They developed new material, arrangements and a concert performance that hum with the ease and playfulness that can only be cultivated through deep understanding and trust—as musicians and as partners.

The duo’s diverse repertoire and unbridled passion come to life on stage with a presence that is versatile, robust, and masterfully executed. Audiences remark at their sincerity in sharing stories between tunes. Verch’s delicate voice, energetic footwork, sand paper foot percussion and stunning playing (sometimes combined all at once!) are jaw-dropping. Walters’ melodic banjo stylings, solid rhythm guitar accompaniment and tasteful vocal harmonies are at once understated and brilliant, dueting with Verch’s skills in glorious harmony. Their ability to preserve the authentic folk traditions of the past and reintroduce them into the musical landscape of the present is a testament to their masterful musicianship and widespread appeal.

Even now, after more than two decades leading her own band and with 14 albums in her name (two of which were nominated for JUNO Awards, among other honors), there is nothing that fulfills Verch or gives her more joy than playing and sharing her music with the world. “It’s like the reward for everything else,” she says.

Together, she and Walters are exemplary tradition-bearing performers: never forgetting the roots of the music, that connection to the people out there in the audience or on the dance floor, to the community sparked by a good song. “It’s about joining together to celebrate everyday life, through music. We’re all in this together.” And so together they press onward: diving deep into musical tradition, bringing people together and forging connections, and sharing their insight and genuine love for the music they play so well.