Though Rowe has often made his hometown of Troy, New York and its surrounding areas his creative base, New Lore brought a new environment and a new producer. Appropriate to his love of folk-blues legends like Howlin’ Wolf, he ventured to Sam Phillips Recording studio in Memphis to work with Matt Ross-Spang (Jason Isbell, Margo Price). They tapped into the history of the legendary space to hone a sound that is at once rich and stark, putting Rowe’s deep and dynamic range at the forefront. Because if high notes can shatter windows, Rowe’s low and guttural ones can meld sand into glass.

“I was looking for a specific sound and part of that was the rawness, the element of risk that Sam Phillips took with his artists,” Rowe says. “Since I was a kid I was really drawn to that music. I wasn’t really listening to music my peers were: I was really into old soul music, and music coming out of Memphis. It’s been in my work maybe in more subtle ways than now, but it’s always been in there.”

The songs on New Lore were often built to let Rowe’s voice come through in its most stirring capacity: from the wrenching ode to parenthood “I’ll Follow Your Trail” to the naturalistic “The Very First Snow,” instrumentals are layered carefully and artfully over the vocals, finding footing in Rowe’s sly and idiosyncratic guitar style. Much of what came was a result of Rowe going into the studio with a more relaxed approach no preproduction was done, no demos finished. Rowe and Ross-Spang embraced an organic style that is so representative of how the singer-songwriter leads his life, and that is one of always fighting to flow gently with the earth, not against it.

“We were looking for perfect imperfection,” Rowe says. “If we fucked up and it was cool, then I wanted that in there. You let it happen and you don’t polish it too much.”
New Lore also ushered in a career shift this time, after several years on Anti-, Rowe launched his own label, Three Rivers Records, and will release his LP as a collaboration with the Anti- family. He also embraced a new way of funding his work, using a wildly successful Kickstarter campaign to make the Memphis dreams a reality, and embarked on a series of house shows to reconnect with his fans at the most basic, intimate level.

“I kept asking myself, ‘What would be cool? What would be something different?,'” Rowe says. “That’s what led me to house shows, and to the Kickstarter and to just take chances. Those chances are what led me to early rock and roll in the first place that’s all about taking chances. I had no idea what to expect, but I could tell as it got more momentum that people really wanted to see it happen.”

Rowe also found himself on another unexpected wave his unreleased song “To Leave Something Behind” found life in Ben Affleck’s film The Accountant, exposing the mystique of his music to an even wider audience. Written five years ago in London, it echoes some of the themes that half a decade later surfaced again in New Lore: the things in life we pass down to our children, the ideas we learn from our elders, the shadows we leave behind when we are gone. The first single, “Gas Station Rose,” is about two people trying to navigate that together. “That’s the conflict to the story,” Rowe says. “They want to stick it out, but they know it’s incredibly hard to keep shit together. Conflict makes for a great song.”

So does opening yourself up to vulnerability: New Lore is formed from that tenderness, exposed like an open wound but one asking for healing, not to linger in pain. Like “Promise of You,” with a gospel swing inspired by Ketty Lester’s classic “Love Letters” and the piano-driven “I Can’t Make a Living From Holding You,” Rowe speaks to the reality of loving and leaving, a constant dilemma for a man who builds half of himself on tour playing to strangers and half of himself tucking his children in at night. Home is process, not a destination, and New Lore is a roadmap there perfectly imperfect, raw and real.

On the inside cover of singer-songwriter Kaiti Jones’ new record, VOWS, it reads:

Vow. a solemn promise or assertion; specifically: one by which a person is bound to an act, service, or condition.

As human beings, we take daily vows. With our relationships, our families, our beliefs, the stories we tell ourselves and others, and the characters and memories to which we give power – we are constantly taking vows with the things around us. For better, or for worse. I think this is a universal part of the story of humankind, a story I hope this collection of songs allows each of you to enter in some way. Thank you, dear friends, for your ears. May these stories leave you better, richer, fuller than you were before.

Since Jones was three, she has wielded a musical instrument. Jones mastered the viola in high school and dabbled on piano, french horn, and cello growing up. But it wasn’t until age 13, when Jones finally picked up a guitar, that she began making music on her own terms. It’s an electric guitar that Jones started writing on. She created distorted lo-fi rock songs with blaring power chords – an appropriate cure for teenage angst, or middle-school confusion. By the end of high school Jones had fallen into folk, more or less abandoning her rock roots.

In 2009, Jones recorded her first EP, Arise Child. It’s a dark, dreamy mix illustrating Jones’ ability to pull one into a story through lyrics heavily devoted to the deep regard she has for human connection. At the time, she was studying creative writing at Belmont University in Nashville, Tennessee. There, she developed her songwriting through crafting personal essays and making music in various studios scattered across the city.

Jones’ next EP, Growing Things, came out four years later in 2013. The production value increased and her style became more distinct. The songs are tighter, simpler, and emphasize characteristics of some of Jones’ favorite writers: Flannery O’Connor’s visceral stories of hardship, faith, doubt, and praise; the way Wendell Berry connects human lives and the earth; and the sense of wonder and beauty found in the words of Madeleine L’Engle. Her songwriting echoes the traditions of Patty Griffin, Josh Ritter, Anais Mitchell, and Bob Dylan – people who, as Jones likes to say, “know how to tell a story.” The themes entwined in these artists’ works find their way into Jones’ music, where pain, love, and hope exist along a dusty windblown plane somewhere deep within.

On November 26th, 2017 – another four years later – Jones filled an intimate subterranean music venue with over one hundred people she knows and cares for, the very people who live at the roots of her songs. This was Jones’ first time headlining Club Passim (she sold it out nearly a month before the show), a legendary folk spot located down the street from her home in Cambridge, Massachusetts. Her first full-length record, VOWS, dropped only a few days earlier and copies of it rested on the table in the front hall.

Jones’ vows are genuine. They live in her music, her deeply personal lyricism, and the commitment she has made to her community. The album itself took on another level of professionalism, showcasing the immense growth Jones has made as a songwriter, composer, producer and musician over the past eight years. For this project she was sought out by Golden Bear Records, an indie label in Des Moines, Iowa. Over two weeks in the studio in June, Jones and the folks at GBR made VOWS come to life. Now, go to the stereo in search of yourselves. In Jones’ words, may you feel “better, richer, fuller than before.” 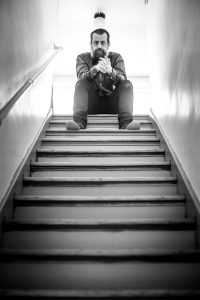