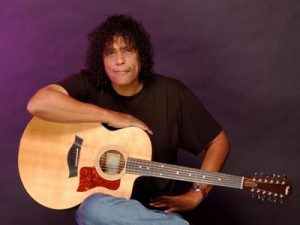 Advance tickets are $10.  Visit the website at oldsloopcoffeehouse.org, John Tarr Store in Rockport, or The Bookstore of Gloucester.  The suggested contribution at the door is $12 for adults, $8 for those 65 and older, $5 for those under 18, and $24 for families.

Grammy-nominated Jon Butcher’s characteristic sound and signature guitar work represent a skillful mix of Americana – rock, r&b, jazz and folk,  all of it focused through a prism built from the blues.  Early in his career, Jon was compared with Jimi Hendrix, although he counts Bob Dylan, Taj Mahal, Richie Havens, and John Lennon among his influences.  Jon’s acoustic work on acoustic guitar, dobro, and banjo has found its way into feature film, cable TV, and his live concert schedule.

Danielle Miraglia comes armed with a strong steady thumb on an old Gibson, an infectious stomp-box rhythm and harmonica with tunes ranging from heart-felt to socially conscious that will move both your heart and hips. Her latest CD, “All My Heroes Are Ghosts,” was released with her band Danielle M and The Glory Junkies.  Danielle was nominated for a 2015 Boston Music Award for Singer-Songwriter of the Year.

Coffee, tea, and a variety of delicious (and very popular) home-made baked pie and cake will be sold before and after the concert and at intermission.