We welcome Jim Trick and friends, Radoslav Lorkovic and Lisa Bastoni, to our stage on February 28 at 8:00 pm. All three musicians will play in the round and participate in an engaging celebration of song and musical kinship.

Jim Trick brings a real-life perspective, with an engaging and entertaining presence to any venue he plays. Joyful, sincere, and magnetic are just a few of the words to describe his personality. Thought-provoking lyrics and masterful guitar playing are the rest of the equation that makes up a Jim Trick performance.

As a child, Jim was bullied for choosing music over sports, for having a funny last name, and for struggling with obesity. Through his experiences, he delivers a blend of alternative folk, thoughtful pop, and spoken word. Jim takes the acoustic guitar down a path of percussive, intricate and ethereal ranges, creating well thought out melodic support for carefully crafted lyrics. His most recent release, Further From the Tree, was fully funded by his loyal fan base and he’s got a full album’s worth of songs for a new album.

Radoslav Lorkovic draws from a multitude of influences ranging from elegant classical and jazz styles to the rawest, most basic blues, country and soul with his distinctive piano style. His tenure on the R&B and folk circuits has led to five critically acclaimed solo recordings and numerous appearances with artists including Odetta, Jimmy LaFave, Greg Brown, Richard Shindell, Ellis Paul, Ronny Cox, and Bo Ramsey. His thirty-year touring career has led him from the taverns of the upper Mississippi River to the castles of Italy, the Kennedy Center and Carnegie Hall. Rad combined these blues roots with his classical heritage, picking up Tex-Mex and Zydeco accordion as well. Six CDs later, Radoslav is still touring and regularly appearing at folk festivals around the world.

Singer-songwriter Lisa Bastoni’s new album, How We Want To Live, chronicles life changes, including songs about the dissolution of her marriage and learning to live a new normal. The album finds the singer diving deeper into the life she craves with themes ranging from romantic relationships to those with her children, parents and friends. Weaved throughout are her hopes for herself and the world around her. A 2019 Kerrville New Folk Winner and nominee for 2019 Boston Music Awards folk artist of the year, Lisa Bastoni has shared the stage with Lori McKenna, Little Big Town, Regina Spektor and many more. 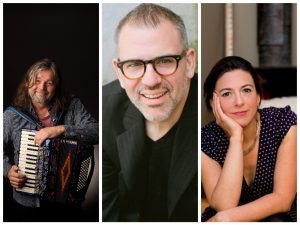