Buskin & Batteau have been winning hearts and minds with their soulful acoustic balladry and fun-filled performances for more years than they care to remember.

“We’re not from the Cambridge, came-over-on-the-Mayflower first wave of folkies [Joan Baez, Tom Rush, Eric Von Schmidt],” says Buskin, “but we’d like to think we’ve stolen many of their licks.”

The Washington Post called their work “an irresistible amalgam of melodic, sensual pop, folkie grit, and killer wit. And while their humor runs the gamut from topical irony (“Second Homeless”) to terminal silliness (“Jews Don’t Camp”), it’s their unique combination of instrumental virtuosity (piano and violin, primarily, though both play other instruments as well), soaring vocal harmonies and unparalleled lyric-writing that prompts the standing ovations and rhapsodic reviews: “The most musically sophisticated act in folk” The New York Times; “Acoustic Heaven” The Boston Globe. And with the help of uber-percussionist Marshal Rosenberg, they manage to kick the rhythm pretty hard for a couple of seasoned troubadours.

Sophie Buskin
Raised in the heart of New York City by two accomplished musical parents, singer-songwriter Sophie started studying piano at age three and first set foot in the studio at four. Her parents recall she was undaunted by the adult singers as she sat on the tallest stool to be close enough to the microphone: the headphones were bigger than her head! She caught the harmony bug and began working extensively as a child jingle singer, featured on many TV/radio spots from GE and Hess Trucks to Six Flags and the Kidz Bop CD series. 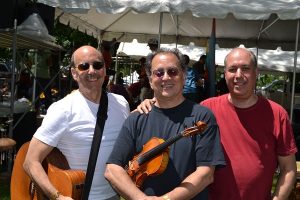