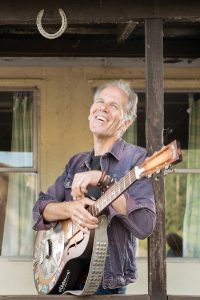 Advance tickets are $10. Visit the website at oldsloopcoffeehouse.org, John Tarr Store in Rockport, or The Bookstore of Gloucester. The suggested contribution at the door is $12 for adults, $5 for those age 18 and under, and $24 for families.

Brooks Williams hails from Statesboro, Georgia, the town made famous by country-blues legend Blind Willie McTell. Ranked in the Top 100 Acoustic Guitarists, he’s a mean finger-picker and a stunning slide guitarist. Plus, “he has a beautiful voice,” says AmericanaUK, “that you just melt into.” Not one easy to pigeon-hole, Brooks’ music is the love-child of country-blues and Americana. fRoots says, “Soulful Americana, full-on blues and tasty rootsy grooves. He really rocks!”

Prateek has been described as “Not just any guy with a guitar…” by The Boston Globe and perhaps that’s the best introduction to his music besides actually listening to it. The Boston-based artist recorded his debut EP, “Walking in My Sleep,” with only his guitar and two microphones in an attempt to emulate Bob Dylan’s early work. Since then, Prateek’s music has evolved to incorporate gritty electric guitars, silvery backing vocals, and lush strings, all draped around his own soulful, powerful voice. Prateek has been a Kerrville Folk Festival New Folk Finalist and has been nominated for Singer-Songwriter of the Year at both the New England Music Awards and the Boston Music Awards. His most recent EP, “All You Do Is Drown,” is available wherever digital music is sold or streamed.